And suddenly the March equinox is upon us and past us, with daytime longer than night. This regular blog writing is tough work and at last I find time to pen some thoughts on the seasonality of the plethora of different colours that grace and brighten a walk, scramble, stumble and wade along our seashores. It has been a busy couple of months, split between seaweed and other work and trying to get ready for some big changes that will be coming to Slate Islands Seaweed hopefully in the coming months. Obviously I have been down on the seashore despite the weather for actually quite a lot of the year not being the most conducive to comfortable or even safe rummaging around. And with that spring is here, and it is time to explore why this time of year up until the end of May is probably the best time of year.

Yes March, April (possibly the best month) and May are an amazing time to go looking for seaweeds. It is a proper cross-over time and for many species has the perfect balance of sufficient day light (12:12 going to 14:8 l:d, a ratio often used in artificial conditions) with the colder temperatures (both air and water) many species like. The air temperature is not going to exceed 16ºC (well certainly not in Scotland until May) for days on end, so not creating a thermal stressor for many inter-tidal species, and the water temperature is still close to the winter minimum, so around 6ºC starting to rise slowly to maybe reaching 10ºC by the beginning of June. So around April the water maybe around 8ºC. The other temperature stress of freezing conditions also should have passed. The beast from the east may have impacted some of our species, on Easdale I noticed that many species had suffered some degree of bleaching (pictured is some bleached pepper dulse), and this could easily be due to freezing. 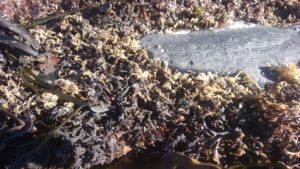 Though it is certainly possible that the snow and sub-zero temperatures will return all the way to May, this is unlikely. With improving weather, especially a drop in the frequency of storms and strong winds, the sea conditions improve, creating less turbulence, improving the light penetration in the water (i.e. improved visibility) with all the nutrients that the winter storms will have churned up (along with all the run-off from the land feeding into rivers flowing into our waters) available, the perfect mix for growth of our macro-algae is present. Of course phytoplankton such as those micro-Heterokont relatives of our familiar phaeophytes (the brown seaweeds), the diatoms start taking advantage of ideal conditions which then lead to a grazing frenzy by possibly the most important grazers in the seas, copepods, which then provide food for zoo-plankton which are then food for small fish which are then food for bigger fish, sharks, dolphins, whales, seals, sea-birds e.t.c. On the blades of many seaweeds at this time of year you will see many a species of snail start getting busy, grazing and laying eggs. It will not be uncommon to see small jelly blobs, some spotty, some looking like mini mint-green ring donuts, some just yellow blobs. It is early breeding time. And suddenly the sheer abundance of seaweed becomes striking. Many species of kelp, especially Laminaria digitata (oarweed/tangle), L. hyperborea (forest kelp/cuvie), Saccharina latissima (sugar kelp) and older Alaria esculente (winged kelp/dabber locks) start reaching their optimal length to flavour.

Just starting to reach collectable length is sea spaghetti/thong weed (Himanthali elongata) which will be optimal in April, well the iconic and identifying reproductive receptacles will be.

Pepper dulse (Osmundea pinnatifida) and Royal fern weed (Osmundea osmunda) are still around, many at full growth and maximum density, with awesome flavour, and will be around until May. What is more species like Dumont’s tubular weed (Dumontia contorta), a meaty pepper like punchy red seaweed (Rhodophyte) that a small amount boiled will provide a fish stock like flavour, and Irish moss (Chondrus crispus), the “original” carrageenan source, are really coming through, with Irish moss showing its very distinctive iridescent blue tips. Black carrageen (Mastocarpus stellatus) is starting to really make its presence felt on so many shorelines that I have visited recently, from Easdale, Port Ban and out on East Lothian. Beautiful seaweeds such as Asparagopsis spp., Ceramium spp. and Delesseria sanguinea become more visible, the agar species of Gracilaria and Gelidium can also be easily found, all showing off their various shades of red. And then comes the coralline reds such as the common ones Corallina officialinis and Jania rubens, which seem to cover rock pools and any mid-shore to low-water rock like tough little ferns, a crusty grass.

Young growths of dulse (Palmaria palmata) will be found, with a bright and delicate maroon colour. Visible but in many cases just to small to be properly collected, though there for a wee nibble to really get that umami rich meatish flavour, an edge of bacon.

Adding a bright contrast are of course the less abundant but equally striking green seaweeds (Chlorophytes). Velvet horn /stagweed (Codium spp.) will be found in rock-pools, still providing that very striking taste of the sea, without the over powering saltiness. The darker ivy-green, tough feeling bushy Cladophora will be found on rocks from lower mid-tide, looking like flowing green hair. The most notable will be the increase in the Ulva species, first being gutweed (U. intestinalis) followed by sea lettuce and green ribbon weed increasing in abundance, the bright green standing out across rocks and in rock-pools against the pale pink of the encrusting coralline red seaweeds, such as Lithophyllum incrustans.

This is what some of what I see when I go down to the seashore at this time of year. It is one of the best times to come out to explore the edible seashore, so if this has peaked your interest, why not email me here, reach out to me on twitter (@seaweedonaslate) or hit me up on Facebook .

Remember, always respect the sea and keep safe on the seashore.